Showing posts from May, 2017
Show all

A Dip to the South

May 28, 2017
Even though the calendar may say it is still spring, usually by the end of May in North Carolina it is full on summer weather. With blue skies overhead, those temperatures were coming, but for the mid morning start, it was still comfortable, if not a bit cool.

Terry T-Bo and his pillion partner Kina met up with Kasey and I at the Sunoco Gas Station in Locust at 200 North and Bethel Church. After a brief exchange, we headed out with The Black Pearl in the lead. As the title would suggest, we started out heading south. We passed through Stanfield, and just passed the town's southern edge, we veered off on Harvell Road. We snaked our way over to Rushing Road with a short jog on Oak Grove Road.

Rushing eventually returned us to 200 South, which we rode on for a short while, and crossed the Rocky River. We made a shallow left on Morgan Academy sweeping right and left into New Salem. Back on a state highway, this time numbered 205, we headed further south. 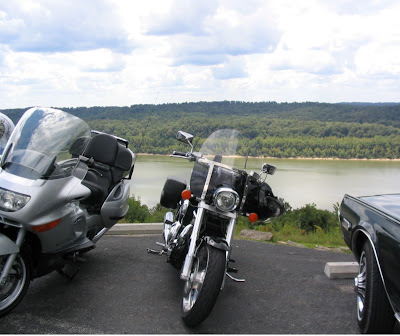 
When you are laying out a potential route for a motorcycle, there is a lot you don’t know. There might be a place that you have heard a lot of bikers talk about, or more than likely a stretch of curvy road, that you might want to explore. If you are riding into unknown territory, your plan could lead you onto some asphalt ribbons lined with great scenery, or onto some stretches that makes you wonder who decided this was a road. Hopefully, the easiest part of a trip is the starting point. If you don’t know where you are, you are going to have a hard getting to where you want to go. The second easiest pick will probably be your destination. It’s real easy if you are planning a loop, since the start and end are the same place. Point A and Point B, well that’s it for a lot of people. They don’t have a care for what’s in between. For those of us on two wheels, we often seek the longest distance between two points, so our trips sta…
Post a Comment
Read more
More posts